A Short History of Immanuel UCC 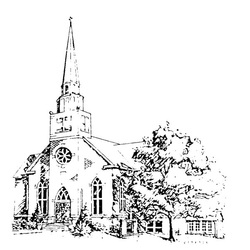 In the late 1870's the Wright City citizens showed much enthusiasm about building a faithful community.Rev. H. Feix was called to Wright City to establish an Evangelical Church, which was originally named "Friedens Evangelical Church," and organized on September 5th, 1880, with 40 men and their families. In 1881 the 1st church was built and dedicated at a cost of $3871.53.
By the church's 25th Anniversary, 1905, the church had grown to 80 families. In 1915 the church began to transition from the use of German language into English. In 1919 the name of the congregation was changed from "Friedens" to "Evangelical Church of Wright City."
In January 1955 the name of our congregation was changed to "Immanuel Evangelical & Reformed Church." In 1959 the name of our church was was changed to the present title, "Immanuel United Church of Christ." On April 9th, 1967 the Fellowship Hall was dedicated as part of the Morning Worship Service. In 1976 our membership grew  to 245 families.
Immanuel United Church of Christ has since been remodeled and renovated, but her service remains to God and the community. Sunday school is held during the school year, during church with a Vacation Bible School session during the summer. Immanuel's clubs and committees include Men's, Women's, and Youth Fellowship, Quilting, Evening Circle, Memorial Committee, Evangelism, Stewardship, Pastor Relations, and Board of Education. These groups continue their devotion to God as well as extending the hand of friendship out into the community with social dinners and events. The fellowship hall also serves community organizations such as local 4-H club, Girl Scouts, and AA.
The beautiful pencil sketch above was done by one of our former members, Don Brandes.  Don grew up here in Wright City, attending this church & the area schools.

Living one day at a time,
Enjoying one moment at a time,
Accepting hardships as the pathway to peace,
Taking this world as it is,
Not as I would have it,
Trusting that He will make all things right
if I surrender to His Will,
That I may be reasonably happy in this life
and supremely happy with Him Forever in the next.